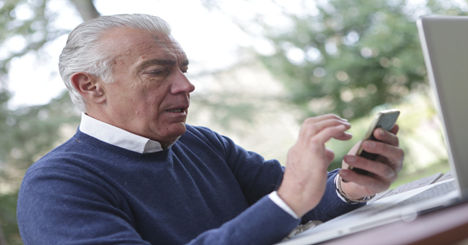 As senior citizens get older, that does not mean that they are getting more feeble, less intelligent, or less active. On the contrary, many seniors are much more active physically and mentally than they were in previous years. As a matter of fact, they become much more active in crystallized intelligence which means learning, studying new things, understanding, and achieving a new set of tasks. But what happens with seniors and technology?

Why is it that seniors and technology are often in conflict with each other? New (and even older) technologies tend to have display screens with tiny lettering, that include touch-sensitive areas that are so difficult to hit as eye-hand coordination declines.

Physical controls are by far the easiest to control–and they are safer too, especially in safety-critical tasks such as driving a car. These useful controls are few and far between now. Why? It’s called money. Corporations have not opted to save a few cents in manufacturing and in a misplaced desire to be super cool to the younger generations.

To me, speech controls could be incorporated as a substitute for physical controls, although I have heard that speech controls may not be up to par. And for some reason, technology for seniors seems to live up to old, frail, and ugly designs.

As revealed by numerous articles on the Internet, there are a variety of reasons where technology is not being used by the elderly generation. Let’s look at a few of them.

First, mastering new technology is not an easy task for seniors as technology is often complicated as the seniors lack experience in using technology to use as a baseline. Seniors don’t usually have a point of reference to assist them in absorbing new knowledge.

That’s Hard and Takes Too Much Time

Another point is that many senior citizens think technology is too hard to learn or that it takes too much time. In addition, the concern for security is all too present in their minds.

Thirdly, contrary to what you may believe, not all seniors trust technology. Because of that mistrust, some of the elderly are skeptical and unwilling to take a chance in learning technology.

Fear Can Be a Driving Force

Gen Z, Millennials, and Gen X are much more willing and even inclined to jump in and learn technology. Many Boomers, however, can actually afraid of automation, preferring to continue with the ways they are familiar with.

Next on the list that may deter seniors and technology from being compatible are financial hardships. The elderly do not always have extra money to purchase laptops, computers, or smartphones.

Finally, anyone that has physical, developmental, audio/visual, or learning disabilities can experience roadblocks for anyone learning technology, let alone seniors. For example, it can be hard for them to see the screen, hear vocalizations, or even be able to use a touch screen because of a condition called leathery finger or zombie finger caused by hardened, dry, or callused skin.

Megabite is here for seniors. We have a special Tech Support for Seniors Program that is dedicated to relieving stress and helping seniors get along with their digital equipment. For more information about our support for seniors, call today 904-430-0350.